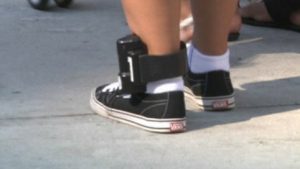 Probation Violations Because of Technological Failures

What happens if you are on probation, parole, or are under house arrest when your ankle bracelet malfunctions? What if it stops transmitting a GPS signal and the police are unable to verify where you are? You aren’t technically in violation of your probation; but how are the authorities to know that if your electronic monitoring device cuts out? Probation violations because of technological failures is becoming an issue in Massachusetts that makes it necessary for you to hire an experienced criminal defense attorney.  END_OF_DOCUMENT_TOKEN_TO_BE_REPLACED

A Melrose man recently found himself arrested and inviolation of his probation when he was caught drug dealing by Lawrence police. The Lawrence Eagle Tribune reports that Mohamed Soltani had previously been prosecuted in Boston for drug dealing and was placed on probation and ordered to wear a GPS Monitoring Bracelet on his ankle. But authorities claim he continued drug dealing and engaging in a variety of other illegal activities. END_OF_DOCUMENT_TOKEN_TO_BE_REPLACED

It seemed like a routine disposition on a domestic violence case in Salem District Court. Fifty-four year old Anthony Rosado received a suspended sentence as a result of a domestic incident last November in Beverly Massachusetts. Rosado’s terms of probation included a requirement that he remain drug free and report to his probation officer. Apparently, the terms were too much for the Beverly man and The Salem News reports that two days into his sentence he tested positive for opiates. The News reported that his probation officer also claimed that Rosado tested positive again two weeks later then just stopped showing up. As a result of Rosado’s behavior the probation department issued a notice to him to appear in court and face a surrender hearing. On the day of his court hearing, he was detained by the Court Officers after he set off the alarm. A bottle of liquid was ultimately discovered in his sock. The speculation was that Rosado planned to present this urine in an effort to beat the drug test. After a brief hearing he was carted off to Middleton jail pending a final surrender hearing.

In Massachusetts, a probationer has only a conditional liberty interest. See Commonwealth v. Wilcox, 446 Mass. 61, 64 (2006). The probationer must comply with the conditions of probation. A breach of a condition of probation constitutes a violation, and if the probation officer receives information tending to show that the probationer has breached, the officer may “surrender” the probationer to the court. Id., at 64-65. A probation revocation hearing is not part of criminal prosecution and, thus, a probationer need not be provided with the full panoply of constitutional protections available at criminal trial. See Commonwealth v. Wilcox, 446 Mass. at 67, see also Gagnon v. Scarpelli, 411 U.S. 778, 782 (1973). “The revocation of probation does, however, result in a deprivation of liberty within the meaning of the due process clause of the Fourteenth Amendment to the United States Constitution and thus, the Commonwealth must provide probationers with certain protections at surrender hearings. Commonwealth v. Durling, 407 Mass. 108, 112 (1990); Gagnon v. Scarpelli, 411 U.S. at, 783; Morrissey v. Brewer, 408 U.S. 471, 487-88 (1972). “The hearsay on which the judge relies must be reliable.” Commonwealth v. Nunez, 446 Mass. 54, 58 (2006). The Supreme Judicial Court has written that unlike the confrontation clause, due process demands that evidence be reliable in substance, not that its reliability be evaluated in a particular manner. See Commonwealth v. Given, 441 Mass. at 747 n.9. While the court did not define what it meant by the term “reliable in substance” the high court has set the standards to verify reliability. Evidence that would be admissible under standard evidentiary rules is presumptively reliable for due process purposes. See Commonwealth v. Given, 441 Mass. at 747, see also Commonwealth v. Durling, 407 Mass. at 118; Ohio v. Roberts, 448 U.S. 56, 66 (1980), overturned 541 U.S. 36. Hearsay evidence that is inadmissible under the rules of evidence or statute is inadmissible. See Commonwealth v. Given, 441 Mass. at 743-44.

Thus, if you have received notification that you are facing a surrender hearing you must have an experienced criminal defense lawyer on your side. Knowing the applicable standards and ensuring that the probation department is held to meet their burden is imperative. Most defendants do not go to jail because of the initial charges in district court. They find their way to the house of correction because the probation department maintains that he or she did not fulfill his or her terms of probation. In most cases, there is a reasonable argument that the defendant did not violate the terms of probation and/or that the probation officer has improperly issued a violation notice.

END_OF_DOCUMENT_TOKEN_TO_BE_REPLACED

Apparently, disgraced Senator Anthony D. Galluccio did not take advantage of the tremendous break he was given when a Cambridge District Court Judge allowed him to serve six months in home confinement. Galluccio received an early Christmas present when he was sentenced to six months home confinement on the condition that he submit to random alcohol testing, lose his license for five years and pay a $1,000.00 fine after he admitted to operating under the influence of alcohol, commonly referred to as “DUI” in Massachusetts, and leaving the scene of an accident causing personal injury. So far, Galluccio avoided serving the mandatory six month sentence in prison. However, he faces a detention hearing later on today.

According to The Boston Herald, because he failed “several” breath tests while under home confinement the probation department has issued a notice of detention which requires Galluccio to appear in court and explain why he should not be committed for violating his terms of probation. Apparently, Galluccio is blaming his toothpaste for his failed tests. The Herald reports that Galluccio stated the following after he was served with a detention notice, “[W]hile I knew that mouthwash or cold medicine would set the machine off, it did not occur to me that toothpaste would.” Despite the allegation, Galluccio maintains that he “fully committed to sobriety and continuing treatment, and remain focused on serving my constituents.”

In Massachusetts, a probation detention hearing is the first step that the probation department takes when seeking confinement for a probationer. Generally, notice of e detention hearing issues when a probation officer becomes aware that a defendant has not complied with conditions of probation. In this case, the probation department is claiming that Gallucio’s failure to remain alcohol free is a violation of probation and warrants “detention” or “incarceration.” During the initial hearing a judge will hear the probation officer’s reasons for wanting the defendant held pending a final hearing that generally takes place within ten days if a defendant is held. At both the initial and final detention or surrender hearings the defendant is given a chance to present evidence as to why he should not be surrendered. Although all of the facts of this case are not known at this time, the Senator seems to have an uphill battle on his hands as the Plymouth District Attorney Timothy Cruz, whose office prosecuted the case, said last night Galluccio should have been tossed in jail in the first place.

If you are facing a probation detention hearing or a probation surrender hearing in Massachusetts it is important that you have an expereinced Boston defense attorney on your side. In many Massachusetts District Courts defendants are not committed to jail because of the initial conviction however, as the result of a probation surrender. The consequences for not prevailing at a surrender hearing are high as a defendant may face serving the maximum sentence allowed for the underlying conviction.

The standards that the probation department must meet during surrender hearings are lower than the “beyond a reasonable doubt” standard that the Commonwealth must meet at trial to sustain a conviction. If you are facing a surrender hearing it is imperative that you have a qualified Massachusetts lawyer on your side to navigate you through the process.