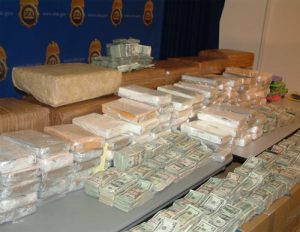 At the end of June, police stumbled onto evidence of heroin trafficking activity while investigating a home invasion, which lead to the discovery of one of the largest drug crimes ever in New England. WMUR9.com News reports that more than $2.2 million dollars worth of heroin cut with fentanyl (a highly potent opioid) was recovered along with over $200,000 in cash.

On June 22, police were called to the Manchester home of Jeannette Hardy, 24, to investigate an attempted home invasion. Hardy had been shot in the hand by the home invaders and was taken to the hospital. When police arrived at Hardy’s home to investigate the invasion, they found 1,929 grams of heroin and nearly $200,000 dollars in cash in plain view. Hardy was arrested after her wounds were treated and she was charged with heroin possession and intent to distribute.

Evidence from the drug seizure at Hardy’s home led investigators to a long-time suspected drug trafficker, Luis Nieves, 33, of Lawrence, Massachusetts. When police found Nieves, he was in possession of 2,120 grams of heroin. Nieves was arrested and charged with heroin possession and intent to distribute.

Another Lawrence man was identified as being involved in these drug activities. Jose Casellas, 37, was found in possession of more than $300,000 dollars worth of heroin and was arrested and charged with trafficking in heroin over 200 grams and giving a false name during booking. When police went to investigate the residences of Mr. Casellas, they found an additional $20,000 at his apartment and in his duplex second home they found 15 kilograms of heroin mixed with fentanyl, drug manufacturing equipment and drug packaging equipment.

When facing drug charges, things can be confusing, scary and bleak. There are a number of defenses to drug charges and based on the circumstances of your drug case, one of these commonly used defense strategies may be relevant.

Possible Defense for the Suspects?

Based on the above news report, it is possible that there may be a defense to the criminal drug charges faced by Hardy. When police were executing the search warrant on her home, they alleged that the drugs and cash were found in plain view, meaning they were found just laying out where anyone entering the home could see them. When drugs, money or other evidence of a crime is found out in plain view during a legally executed search, it can be used as evidence in court.

However, if the drugs and cash were not actually out in plain view as the police say, and were instead found in a locked piece of furniture, it may be possible that the case against Hardy could be dismissed because the drug evidence would have been illegally obtained.

Our Attorney is a former prosecutor and current criminal defense attorney with over twenty-five years of experience defending clients against drug charges, such as possession, intent to distribute heroin, and heroin trafficking. If you have been charged with an offense related to the drug heroin, please contact Our Attorney immediately either online .