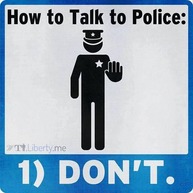 The Police Want To Talk To Me…What Should I Do?

Several times each month I get a similar call from a perspective client telling me that “the police want to talk to me…what should I do?”. My advice never waivers. I have always been consistent in my belief that nothing good comes from talking to the police. Again today I received one of these calls. This call made me think about a certain patterns of conduct that police engage in and my assessment of their reasons for doing so. Here are my thoughts on that subject.

If the police have sufficient evidence against you to file a complaint or refer the case to the district attorney’s office for prosecution they do so. When their information falls short they contact the suspect. And, unfortunately, more often than not the suspect fills in the blanks and provides the evidence necessary to bring criminal charges.

Here is an example. Police officers responded to a scene of a hit and run. The victim was able to get the license plates of the car that hit his car. He never saw the driver and was unable to identify the person’s gender. The car was registered to my client. The police left a message on his home phone asking him to come speak with them about an accident. The man went the station and told the police that he was driving and did not know that he hit another car. He was charged with a crime. Had he not spoke no charges would have been filed against him.

Here are some of the facts surround a rape case I recently defended. A woman complained that without consent and by force she was digitally penetrated by someone she went on a date with. She went to the police department and made her complaint to a sexual assault detective. The police responded by calling the accused and asking him to meet them at the station to give a statement. They told him that the woman made a complaint about a sexual assault and that this was his chance to be heard. He went down to meet with the detectives and was told that the woman was claiming rape. When the detectives asked what the two did on the date the man admitted to having digital sex with the woman but claimed it was consensual. When we met he told me that he had no idea that non-consensual digital sex constitutes rape. The man had unwittingly admitted to committing the offending act. Now, rather than being able to deny the allegations entirely he had to focus on the issue of consent. It is entirely possible that without his statement no charges would have been filed.

The Police Do Not Care About Your Constitutional Rights

When meeting with suspects police often have requests that help them circumvent constitutional protections that you might have. They will say things to the effect of “if you have nothing to hide then you should let us search your home”. You would be amazed at how many people give in to this knowing that evidence might be found during the search. They have this feeling that if the consent to the search they will “look innocent”. Guess again. The cops don’t care about your constitutional rights and if they can work around them they will. Had you not met with them in the first place, no search would have taken place and no criminal charges would have been brought.

Our office has been in the business of defending the accused for nearly thirty years. Call us at 617-263-6800 or email us if you are in trouble. We can help you.