Many people who are charged with gun possession crimes are not career criminals. Instead, they were in the wrong place at the wrong time or lacked understanding in complicated state firearm legislation. Consequences for weapons violations can be costly, both professionally and personally, but they can be avoided when armed with the right information, advice and representation by a Massachusetts gun violations attorney.

In the State of Massachusetts, a firearm identification card, or FID, is required to purchase or carry a weapon, as defined and specified by Massachusetts general law. A Class A FID permits the owner to carry a gun open or concealed, while a Class B license only permits open carry. Penalties for a violation conviction start at a mandatory one-year jail sentence and become increasingly severe if the weapon was in possession at the time of another crime, even if the crime was non-violent and did not involve a weapon.  Such a conviction can also lead to the revoking of any weapons license.  Also, despite the possession of an FID card, it is illegal to carry a weapon if the person is under the influence of drugs or alcohol, on school grounds, or in a secure area of the airport. 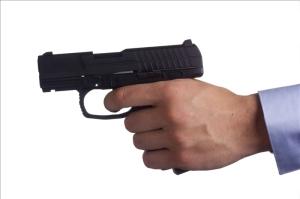 In Massachusetts, an individual can be convicted of a gun violation just by being found in the same vehicle as the owner of the weapon at the time of arrest.  Such was the case for Perez and Hernandez.  Other stipulations of the statute include a mandatory firearms or hunting safety course before a license is granted, the locking and safeguarding of firearms when not in use, the illegal concealment or transport of a firearm without a Class A license, and the illegal possession of stolen guns or certain classes of firearms.

Further, individuals under the age of 21 cannot apply for either a Class A or Class B license, so if they are in the wrong place at the wrong time, their future could be seriously altered. Without understanding the complexities of state gun law, a gun owner is putting himself at legal risk. If you or someone you know is facing a gun charge, it is critical to obtain expert legal counsel.  Rather than choosing a lawyer with the lowest fee, seek a more experienced law professional who knows the ins and outs of state gun legislation and can customize your defense to help you achieve the most favorable outcome.