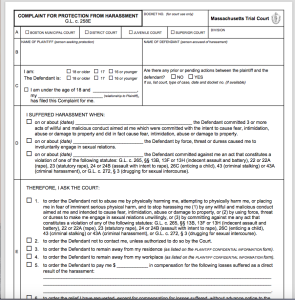 To adequately show “harassment” to obtain a 258E harassment prevention order someone must convince a judge that the defendant has committed a minimum of three acts of “willful and malicious conduct” directed at someone “with the intent to cause fear, intimidation, abuse, damage to property” and that those acts do “in fact cause fear, intimidation, abuse to property”. Initially, the plaintiff will file a complaint for protection from harassment in the district court where he or she lives. A judge will review the papers and determine whether the order should issue temporarily or if a two party hearing should be held.

In the first instance, if a temporary order issues you should get a lawyer to fight for you on the return date. If a two way hearing is ordered you also want to get a lawyer, in this case to prevent the issuance of an order. All too often people think they can defend themselves at these hearings. This is a huge risk because more often than not you will not be able to properly advocate for yourself. Once a harassment prevention order issues you will need a lawyer to fight to vacate or modify the order.

Common Complaints That Should Not Constitute Harassment

A lot of times I see affidavits stating that the defendant made anonymous calls and hung up the phone without saying anything. An anonymous call cannot be attributed to anyone, never mind the accused. Another common complaint will state that the defendant “texted me from someone else’s phone”. Again, how do you know that? If the text came from someone else’s phone a judge should not consider that as a predicate act without more evidence. Here is another frequent complaint; “he said bad things about me on Facebook”. Again, this is not sufficient. Today I reviewed an affidavit where one of the predicate acts complained of was the defendant “unfriending” the complainant on Facebook. None of these accusations constitute harassment under 258E.

Despite the fact that the acts discussed in the prior paragraph do not support the issuance of an order, some judges will still sign off on the paper. They seem more inclined to do so in the initial request for the order or when the accused is representing himself on the return date of two way hearing. This is where a good lawyer can help you. Your lawyer can bring a motion to vacate or modify the order. He or she can point out to the judge the inadequacies in the complainant’s affidavit of testimony.

Convincing The Judge to Change His Mind

Not many people are willing to admit that they made a mistake. Judges are no different. However, filing motions to vacate or to modify might show a judge something that he overlooked or simply viewed incorrectly. I have represented HPO defendants countless times in situations where it was necessary to point out to the judge errors in an initial order. Most judges want to get things right. They want to be fair.  More importantly, they don’t want to be reversed on appeal. Thus, they are receptive to hearing lawyers advocate for justice for their clients. A judge will change his mind in situations where a mistake was made.

Attorney Stephen Neyman has been defending the accused for nearly thirty years. We can be contacted at all times by calling 617-263-6800 or through email. Let us help you with your criminal case.