A local drug task force involving federal authorities, local cops and the state police resulted in significant charges for four Boston natives. Local reports state that two days ago, detectives armed with a search warrant entered a warehouse in an industrial park in Avon, Massachusetts. Pallets inside of the warehouse containing corn also contained over 1,000 pounds of marijuana. In addition to finding drugs the police also found two loaded firearms. Four people were arrested and charged with trafficking marijuana and possession of a handgun. The defendants have been identified as Sheena Hamilton, Jett Ezidi, Donnelly Ray and Stephan Durrant. Bails ranged from seven thousand five hundred dollars to twenty five thousand dollars. 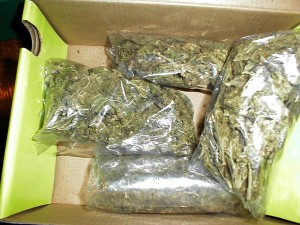 Can the District Attorney Prove Trafficking Against All Defendants?

Anytime I get a call for a multiple defendant trafficking case my clients always ask me if the district attorney will be able to prove his case against everybody. The answer depends on what the cops say they saw and the underlying facts supporting the issuance of the search warrant. Usually search warrants in large drug cases issue after a somewhat lengthy investigation. The affidavit supporting the application for the search warrant has to provide sufficient detail to establish probable cause. That detail often involves the investigation into a particular operation that targets specific people.

So, for instance, in this case it is likely that the affidavit had some information against one or more of the defendants. Perhaps that information could be presented at trial with corroborating witnesses or evidence. But it is equally likely that one or more of the defendants was never mentioned in the affidavit or believed to be part of the criminal enterprise. That person was probably charged simply because he or she was present when the search warrant was executed. As I have mentioned in several previous blog posts, presence alone is never enough to prove a case.

What About Proving the Gun Cases?

Finding the guns was probably a bonus and not something the cops expected to find. There are two guns and four defendants. Attributing possession to each is going to be nearly impossible. This is where aiding and abetting (formerly joint venture) laws come into play. In Massachusetts to prove someone guilty of aiding and abetting the district attorney must prove beyond a reasonable doubt that the accused knowingly participated in the crime with others and that he or she did so with the intention of committing that offense. In other words, for gun possession the district attorney is going to have to show that the defendants were aware that the guns were at the warehouse and that they in some way possessed or assisted in the possession of those weapons. This might be a tough task for the prosecutor. Obviously a motion to suppress will be filed but motions to dismiss or motions for a required finding of not guilty might also be effective in this case for at least some of the defendants.

For nearly thirty years Attorney Stephen Neyman has been defending the accused in Massachusetts. If you are in need of a lawyer call us at 617-263-6800 or send us an email. Let us help you.