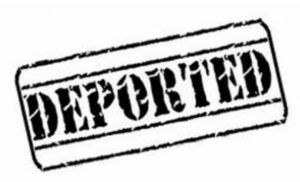 Any experienced criminal defense attorney will tell you that if you charged with domestic assault and battery and you are not a citizen you are at risk of being deported. That risk has increased exponentially over the past several months. This is likely the result of the current political climate in this country. Government agencies such as ICE and Homeland Security are now taking an active look at these cases before disposition. In many instances they are monitoring domestic assault and battery cases involving non-citizens shortly after arrest or arraignment. This post examines one such case and what is needed to prevent deportation.

Last year we were retained on a domestic assault and battery case involving a graduate student from an Asian country. It was alleged that an off duty police officer observed the man shove his then girlfriend against a brick wall in a parking lot adjacent to a local bar. The woman has steadfastly maintained that this is not the case. Rather, she was highly intoxicated, staggering and falling and that the defendant was trying to hold her up. This story has been corroborated by friends of both parties who were present at the time of the incident. Last fall, during the pendency of this case, Homeland Security agents paid a visit to the defendant’s home. They have been calling him and going to the courthouse checking on the status of the case. They have indicated an intention to detain the man and commence deportation proceedings if he is convicted. For immigration purposes a continuance without a finding is tantamount to a conviction. Thus, in order to avoid the risk of deportation our client needs pretrial probation under G.L. c. 276 Section 87 or an acquittal. The judge cannot impose pretrial probation without the district attorney’s consent. Since they will not agree to that in this case we are going to have to go to trial.

The question that keeps coming up is “why is Homeland Security interested in this case?”. No one really knows. The defendant suspects that since he has family working in Middle Eastern countries with passports from those countries he and his family have been targeted by authorities for removal from this country. In nearly thirty years of practice this marks the first time I have seen a governmental agency monitoring a domestic assault and battery case with someone lawfully in Massachusetts. It is deeply concerning that there is an agency salivating at the opportunity to arrest someone and commence deportation proceedings before a Massachusetts criminal case has been resolved. This is a form of racial profiling and it is a dangerous practice. This type of conduct needs to be stopped. Criminal defense attorneys are charged with the duty of fighting against this form of injustice. This is what my office does. We fight for our clients.

The Law Offices of Stephen Neyman is committed to defending the accused. Our results are unmatched. We get results. Call us now at 617-263-6800 or send us an email. We can successfully defend you and protect your rights.