Anytime a criminal defense lawyer gets a police report and sees that his client allegedly confessed to a crime a red flag goes up. Was the confession made voluntarily? Was it recorded? How long did the interrogation last? What promises or inducements did the police make that prompted the defendant to tell them what they wanted to hear? Was the accused impaired by alcohol or drugs? Finally, does the defendant speak English and if not was an interpreter present for the interrogation. This post examines one of my recent cases where the defendant supposedly confessed to a rape and our approach to challenging criminal confessions in Massachusetts. 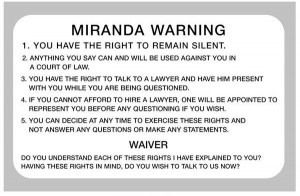 Several months ago a young woman’s mother called the police to report that her daughter had just been raped. The police responded to the defendant’s home, also the location of the alleged crime. They had obtained a statement from the complainant and wanted to interview the defendant who speaks Spanish and very little English. Neither of the two responding officers speaks a word of Spanish.  Nevertheless, remarkably the officers were able to report that the defendant confessed to the crime. His version mirrored the complainant’s story, almost verbatim.

Based on the accusation and confession the defendant was arrested and taken at the police station for booking. There, he was Mirandized and given his Rosario rights. The detective at the station tried to interview him. This process was videotaped and audiotaped. There was no interpreter present. What became patently clear is that the defendant does not speak or understand English. As a matter of fact, one of the officers present at the station said “we need to get this guy an interpreter”.

Getting the Statement Excluded

Without this “confession” the case is very triable. The victim’s story is incredible. The corroborating evidence is dubious and there is no independent support for the charges. However if the confession is admitted trying the case becomes tougher. You have a police officer testifying that the defendant admits to doing exactly what the victim says he did. Here is what the defendant has going for him in this area. A motion to suppress or to exclude the statement due to an invalid waiver of Miranda or a lack of voluntariness should prevail. Any judge viewing the booking video and hearing one of the officers suggest getting an interpreter is very compelling. Moreover, the defendant’s demeanor during the booking process is clear. He did not have a clue what was going on.

If a judge refuses to exclude this evidence all is not lost. After the prosecution presents its case I can play the booking video and let the jury see exactly how unreliable the statement is. The prosecutor’s use of this evidence will then appear desperate and disingenuous. The unreliable confession will taint the rest of the prosecution’s case. There is one more thing the prosecutor has to be careful of. Massachusetts case law makes certain that “[a] prosecutor is certainly under an obligation to refrain from presenting testimony at trial which he or she knows or should know is false.” Regardless, at some point common sense is going to prevail in this case. Either the judge will exclude this evidence or the prosecutor will elect not to use it or a jury will disregard it in its entirety.

No matter how serious the case is that you are facing you need to hire someone with experience. We have been doing this for nearly three decades. Call Attorney Stephen Neyman at 617-263-6800 now. Let him help you.