When a police officer pulls over a driver or stops a driver at a DUI checkpoint because the officer suspects that the driver may be driving under the influence of drugs or alcohol, the officer will more than likely request that the suspect driver participate in a series of tests commonly referred to as field sobriety tests. In Massachusetts, you have the right to refuse to participate in these tests. 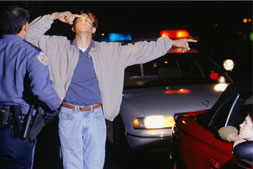 Developed by the National Highway Traffic Safety Administration (NHTSA), field sobriety testing include three different tests that are designed to present indicators of whether the test participant is intoxicated by drugs or alcohol. These tests challenge an individual’s coordination, ability to follow instructions, and balance, and also evaluate involuntary eye movements. The NHTSA has conducted research on each of these tests and determined how accurate each test is for determining whether the test taking participant is legally intoxicated, i.e., that he or she has a blood alcohol content that exceeds 0.08%.