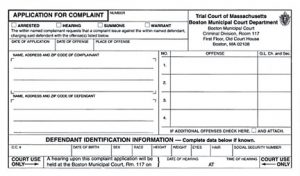 You Need a Lawyer at a Clerk Magistrate Hearing

About two months ago I was contacted by a woman who received notice for clerk magistrate hearing charging her with assault and battery on a pregnant person. After discussing the case it became clear that the accused was actually the victim and vice versa. The defendant retained me and the first thing we did was apply for a cross-complaint. A detective was assigned to the case and an application for a cross-complaint issued, charging the “victim” with assault and battery by means of a dangerous weapon. A hearing on both matters was scheduled for the same day. The outcome of this case provides a clear example of why you need a lawyer at a clerk magistrate hearing.

Your Lawyer Might Be Able to Avoid the Hearing

When we got to court the other side appeared without a lawyer. As is usually the case, our office tried to negotiate a resolution of the matter before the clerk heard any evidence. Oftentimes clerks encourage these discussions with the hope that a settlement will follow and eliminate the need to have the case heard. Notwithstanding the efforts of our office, the detectives and the clerk magistrate, the opponent refused to engage in discussions. She demanded to be heard. She got her way. A hearing followed. After all evidence was submitted no complaint issued against our client. However, a felony complaint did issue against the other woman. She now has to defend the case in the criminal court.

None of this had to happen. Had the woman hired an experienced criminal defense lawyer she likely would have been advised of the potential consequences of proceeding with the clerk magistrate hearing. She would have understood that the standard for the issuance of a criminal complaint in Massachusetts is very low. Only probable cause to believe that a crime was committed and that the accused is the person who committed the crime is necessary to permit the criminal complaint to issue. This woman would further have been informed that, as my office suggested, both parties embrace their Fifth Amendment privileges. Had they done so, the clerk magistrate would have no evidence from which a criminal complaint could issue. This woman would have understood that by going forward, as she did, the risk outweighed any benefits. Now, she has to defend a felony complaint.

Whenever In Doubt Hire a Criminal Defense Attorney

If you are reading this article you are investigating the need for a criminal defense attorney at a clerk magistrate hearing. Don’t take any unnecessary risks. At the end of the day it is much cheaper to hire a lawyer for a clerk magistrate than it is for a criminal case. Inherent in representing oneself is the ever-looming danger of self-incrimination. You can actually make a good case go bad simply by opening your mouth. Don’t proceed pro se. Hire an experienced criminal lawyer. We can be reached 24/7 by calling 617-263-6800. Call now and let us help you.