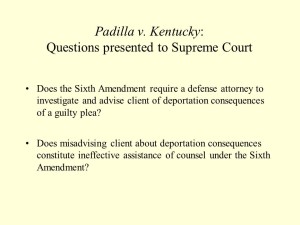 Nearly thirty years ago, when I first started practicing law it was rare to have a client ask me to help him withdraw a guilty plea. Case law in that area had not been well developed. Access to criminal convictions was limited. Deportation, denial of naturalization or exclusion from admission to this country was not what it is now. That has all changed dramatically in the past decade. Criminal history databases are much more sophisticated. Employers and the government can more easily find out that someone has a record. So now, many times each month I get inquiries from people in need of withdrawing guilty pleas and vacating convictions.

The reasons for this make perfect sense. More and more people are getting deported or denied citizenship. Criminal records are preventing people from gaining employment or from promoting at work. It is virtually impossible for anyone to hide from his past. Thus, to remedy this in Massachusetts you can either seal your conviction, and in the case of convictions resulting from guilty pleas, move to withdraw the plea. A withdrawn plea is always the better option if the case can be resolved with a dismissal or a disposition where you will not have a conviction.

In order to vacate a conviction by withdrawing a guilty plea you will need to file a motion. The grounds set out in the motion vary from case to case. In general, guilty pleas can be withdrawn where the plea was not made voluntarily, or where the plea was not made knowingly with full regard to the consequences of the plea or where someone was denied his right to effective assistance of counsel with regard to that guilty plea.

Pleas that are coerced are not voluntary. There have been instances where lawyers have convinced their clients that without a plea they would serve mandatory jail time when in fact the charges had no mandatory sentence associated with them. I am aware of situations where lawyers tricked their clients into believing that their plea would not result in a conviction when it actually did. In these instances guilty pleas have been successfully withdrawn.

Sometimes people plead guilty without knowing that they are giving up certain constitutional rights. It is the obligation of the judge and your lawyer to advise you that your plea requires you to give up three very important constitutional rights. These are the right to confront and cross-examine witnesses, the right to a trial with or without a jury and the right against self-incrimination. When I first started practicing law there were judges who never advised the defendant of these rights. Instead, they would ask the prosecutor what his recommendation was and then ask the defense for their position. Afterwards, a sentence would be imposed. While this was efficient, it resulted in defective guilty pleas.

There also has to be a factual basis for the plea. In other words, whey you plead guilty the prosecutor reads a statement of facts that must establish that you did in fact commit a crime. Sometimes this threshold is not met yet the judge and lawyer overlook this and the judge imposes a sentence regardless. In this situation a guilty plea can be vacated.

Finally, and most common are those instances where your lawyer gave you bad advice. For instance, some lawyers tell you that a continuance without a finding on a first offense OUI case can never be used against as a first offense should you get arrested for another OUI at a later date. Many times, lawyers wrongly told their clients that probation and no jail time would have no effect on immigration status. Bad advice that convinces someone to plead guilty serves as a basis for withdrawing guilty pleas and vacating convictions.

There are countless scenarios available for someone convicted by a guilty plea to move to withdraw the plea and have his conviction vacated. We have succeeded doing this for our clients on numerous occasions over the years. if you need a lawyer call us at 617-263-6800 or email us now. We are ready to help you.