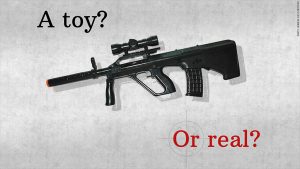 Boston police have recently called for legislation to be put into place concerning toy and replica guns. Not only are BB guns and air rifles commonly used by teens to commit acts of vandalism such as the destruction of property. In light of the recent rash of highly publicized instances of police shooting innocent people and people starting to fire shots back at the police, law enforcement officers have been on high alert when it comes to identifying potential shooting threats. Since officers are on edge and are concerned about their safety while on the job, things can get very dangerous very quickly if an officer mistakes a toy gun for the real thing. When toy guns look real confusion ensues.

Earlier this summer, Law Officer reported that two Brockton, Massachusetts police officers opened fire on a man that they suspected was pointing a real gun at them. The gun, however, turned out to be a toy BB gun. The victim, age 45, was intoxicated and holding a BB rifle when the police officers spotted him. The victim reached behind his back and pulled a small BB handgun from his waistband and pointed it at the officers. The officers fired on the victim for their own safety.

In Massachusetts, the purchase, possession, and use of BB guns is governed by its own set of laws, compared to other firearms. Crimes involving BB guns fall under the category of crimes against the public peace.

If you are in possession of a toy gun, BB gun, or air rifle, and you act like it is a real weapon and make threatening gestures as if it could truly harm or kill someone, you can be charged with assault and battery charges by means of a dangerous weapon. Similarly, if you use a BB gun or air rifle to destroy property, such as shooting out car or home windows, you could be charged with vandalism.