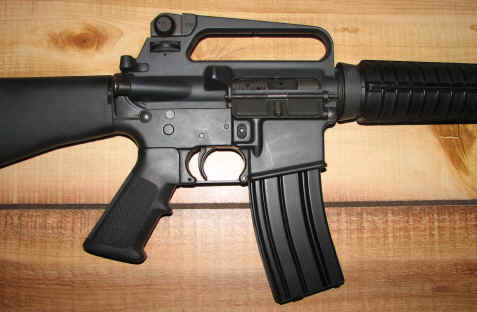 Around 4:30 in the morning this past Sunday Massachusetts State Police responded to a call for a Motor Vehicle accident in the northbound lane of Route 24. The arrived to learn that Jason Ribeiro of Brockton, Massachusetts was driving a car the rear ended another vehicle. The victim called 911. The police investigation revealed the presence of a large capacity loaded firearm in Ribeiro’s car. Both of Ribeiro’s passengers, a juvenile and John Pires also from Brockton were charged with Possession of a Firearm. The case is currently pending in the Brockton District Court.

It is extremely uncommon for multiple parties to get convicted for possessing the same firearm, particularly where the weapon is found in a motor vehicle. Unless one of the occupants is actually holding the gun or the weapon is tested for fingerprints there is simply no way to attribute Possession of the Firearm to one of the parties as opposed to the others. Now Massachusetts and most other jurisdictions recognize that someone can “constructively possess” an item. The law on constructive possession states that even without actual physical possession of an item a person can be legally responsible for possessing that object via constructive possession. To be convicted for possessing an item under that theory the prosecution must prove beyond a reasonable doubt that the accused has knowledge of the object, the ability to exercise control over that object and the intent to exercise control over that item. As to constructively possessing a gun in Massachusetts one of the leading cases holds that you can infer constructive possession of the gun “from defendant’s proximity to gun in motor vehicle, where evidence that, when stopped by police, defendant ‘first leaned forward and to the right before complying with the order to raise his hands[,] . . . [and] [a] loaded handgun was found protruding from under the passenger seat in the vehicle he was operating'”. Conversely, one cannot infer constructive Possession of a Gun in Massachusetts where the gun is in proximity to a defendant’s personal papers. Proximity and knowledge do not show possession.

So how here does the district attorney sustain a prosecution against all three where there exists only one gun? They probably cannot. This is where the assistance of an Experienced Massachusetts Firearm Defense Lawyer becomes necessary. It is possible in some circumstances to succeed on a motion to dismiss in cases like this, at least as to two of the defendants. It might be possible for that motion to apply to all three defendants. To better assess this case it is necessary to know where the weapon was found in the car. What if anything did the defendants say. Is there any physical evidence on the weapon that links one or more of the suspects to the gun; i.e. DNA evidence or fingerprint evidence. What did the person in the other car see relative to the weapon. Where was the weapon found in the car? Who was the owner of the car?

The Law Offices of Stephen Neyman is in the business of defending the accused. We have been successfully defending our clients and protecting their constitutional rights for over twenty years. If you need a lawyer call us at 617-263-6800 or email us right now. We want to help you fight your criminal charges and the time to start is now.