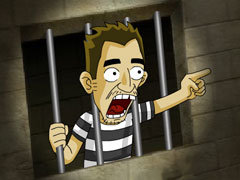 Jose Morales, a Salem, Massachusetts resident was serving a two and one half year sentence in the Essex County Correctional Alternative Center in Lawrence. Last night he left the facility. He had served about three months of the sentence, one that would have resulted in his release in about ten months. His sentence was for Defrauding an Innkeeper, Disorderly Person and Assault and Battery on a Public Servant.

The Correctional Alternative Center is also known as the farm. It is located in Lawrence, Massachusetts on the Merrimack River. The grounds are fairly large. Over one half of the property is used to grow produce that feeds the inmates at the various Essex County Correctional Jails and House of Correction. The facility typically houses non-violent offenders suffering from substance abuse problems. There are no sex offenders or violent criminals housed at that location. The facility offers all types of substance treatment programs and work release programs. The jail houses about three hundred inmates. More than a third of these people perform community service.

Escape in Massachusetts is a violation of Massachusetts General Laws Chapter 268 Section 16. The crime is a felony and is punishable by up to ten years in state prison. It is not often that people in Morales’ position escape or attempt to escape. There are many applications to this statute. It applies to people being detained while awaiting trial. It applies to people on work furloughs. It does not apply to escapes from police station holding cells. It is also critical that the custody of the defendant is lawful custody at the time of the escape for the crime to survive sufficiency challenges. The invalidity of confinement however is not a defense to this crime. For instance, if the defendant was entitled to parole but did not get paroled, his escape cannot be justified.

Serving sentences in minimum security facilities in Massachusetts is often considered a privilege among those in the criminal community. There are no bars or cells in the conventional sense. You can see the inmates moving about the grounds when you drive by. There are no fences isolating the facility. The stay at these institutions is usually short. There is every incentive to remain there to serve out the sentence.

Most likely Morales will get caught. When he does he will have to defend against felony charges. One thing is pretty certain. If he gets convicted of escape, his next stay will be at a facility that has bars, cells, limited movement and few privileges. His sentence will also probably exceed, perhaps substantially, the sentence he was serving at the Farm. Furthermore, he will still have to finish serving the sentence he was serving at the time of his escape. This escape just made matters significantly worse for him.

The Law Offices of Stephen Neyman has defended people accused of committing the crime of escape in Massachusetts. To this crime, as with all others there can be valid defenses. If you are in trouble you need to call a lawyer immediately. We can be reached at 617-263-6800 or you can contact us online.