The Fourth Amendment of the Constitution of the United States limits the power of the police to make arrests and conduct searches on individuals and their property. To honor the privacy of the individual, searches and seizures are considered to be unlawful and are dismissible in a court of law if they are deemed unreasonable.  However, there are certain exceptions within the 4th amendment that allow for searches and seizures to take place. 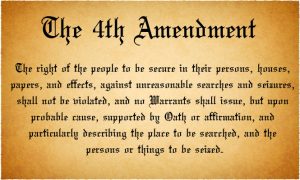 One exception to the 4th amendment is probable cause.  Under this exception, an officer who has evidence to believe a crime has or will be committed can conduct a search of a home or vehicle, especially in the event of an emergency. For example, if an armed suspect has disappeared into a neighborhood, a warrant may not be needed to search any home in that neighborhood. If no such evidence exists, the search is unlawful and any evidence collected is inadmissible in court.  However, under the plain view exception, an item can be seized if it is visible by an officer who is standing in a legal position at the time of seizure.

Another exception is called a search incident to arrest.  This allows a police officer to search for weapons that may be a danger to the officer during an arrest, if the items are in the suspect’s immediate surroundings.  Under this exception, it is lawful to search the glove compartment of an individual who is sitting in the driver’s seat at the time of arrest.  On the other hand, it is unlawful to search under the seats of a vehicle if the suspect is handcuffed at the back of the police car at the time of arrest.

While warrants may be used to conduct the search of a residence under the probable cause exception, certain limits do apply.  An officer must be able to prove that a search is likely to provide evidence needed to support a case, and generally the warrant is limited to areas in which the evidence is likely to be found, such as the master bedroom or kitchen. Evidence found in other areas therein can only be seized if the plain view exception applies. For example, if an officer passes the living room to reach the master bedroom and sees a bag of marijuana lying on the table, the evidence can be seized.  However, items pulled out from underneath the kitchen cabinets cannot be used as evidence in a court of law if the search warrant is limited to the master bedroom.

If you believe your 4th amendment rights have been violated, it might be beneficial to seek legal counsel to review the facts of your case. For example, if hi-tech equipment was used to monitor phone calls in pursuit of a search warrant, the warrant and evidence collected from a search can be deemed unlawful.  Or, if the restrictions of a warrant were violated in the search of your home, you can have the evidence dismissed in court.  The situations of each case vary, as do the applications of these exceptions.  Finding a legal expert to review the details of your case and provide specific counsel is the best way to ensure your 4th amendment rights are protected.

If you or a loved one has been charged for a crime in the Boston area as a result of an illegal search and seizure, I invite you to contact me for a free phone consultation.  to speak with me directly. I provide criminal defense representation to residents of Lawrence, Lowell, Haverhill, Concord, Ayer and Newburyport, Massachusetts.