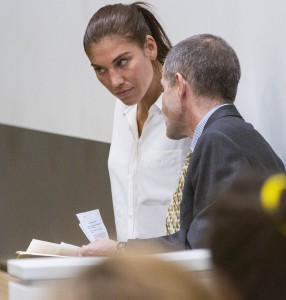 According to reports, police responded to a call about a family disturbance involving a female hitting people and loud noise.  After interviewing witnesses the police decided that Solo was the initial aggressor and arrested her. Apparently, she appeared to be under the influence of alcohol and the other individuals had some injuries.

When Police Respond To A Call For “Domestic Violence” In Massachusetts Does Somebody Always Get Arrested?

Usually when police officers in Massachusetts respond to a call for a domestic disturbance or domestic violence someone will get arrested. The reasoning behind this is because the police want to prevent a violent incident after they leave the scene. Due to the tumultuous nature of these situations, many police departments have procedures that indicate that the “preferred procedure” when an officer responds to this type of call is to arrest one of the parties. It is always important for a defense attorney to request the policies and procedures of the appropriate police departments because these documents can be a helpful tool to an effective cross-examination.

The short answer is that it depends on the circumstances. Siblings and parents and children do not have any privilege that can be asserted that will prevent them from having to testify.  However, in most situations, spouses cannot be forced to testify against one another.

What Types Of Defenses Can Be Asserted In Domestic Cases?

As in all assault and battery cases, a timely investigation including witness interviews should be conducted. In some situations, a defense of self-defense and/or defense of another may be applicable if it is not clear who started the initial physical altercation. Because the parties in these situations generally know one another a defense of misidentification is not usually viable.

Is Assault And Battery A Misdemeanor Or A Felony?