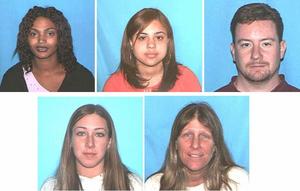 In July police started surveilling a home in Rockland, Massachusetts after receiving a report from a confidential informant that a woman and her daughter were selling Cocaine, Oxycodone and Crack Cocaine from the residence. The surveillance lasted over two months during which controlled buys were conducted and several hand to hand transactions were observed. As a result of these observations, police obtained a Search Warrant. They waited until this past Friday to execute the Search Warrant. Just prior to the search officers were told that a minivan would arrive at the home to deliver drugs to the occupants for distribution. The home occupants, Deborah Crowley and Amanda Crowley, her daughter were present during the search as was the driver of the delivery truck, Ana Olivera. Also present during the raid were Ian Curran and Vanda Oliveira. Everyone was arrested. Curran, Vanda Oliveira, Ana Olivera and Amanda Crowley were charged with Distribution of Cocaine, a Class B Substance and Conspiracy to Violate the Controlled Substances Laws. Deborah Crowley was charged with Conspiracy, Possession With the Intent to Distribute Cocaine and Possession of Class A Heroin, Class B Cocaine and Class C Vicodin drugs. Ana Olivera expressed concerns about her supplier harming her or her family. The cases are pending in the Hingham District Court.

Usually in cases like this one the culpability of the defendants varies significantly. Some of the defendants are being accused of small level street sales. Others perhaps being charged simply for their presence at the time of the execution of the search warrant. Others for having a larger role in illicit drug trade such as supplying the street level drug dealers. Where the culpability of each is different so too is the approach to their defense. Was someone simply present only for the transaction? Was someone coerced into this activity? Was someone simply a drug user who was present at the time of delivery to obtain some drugs? The resolutions of these cases will differ dramatically. Experienced Massachusetts Drug Defense Lawyers love cases like this one. It is easy and common to deflect responsibility to someone other than their client particularly if the cases are severed.

For many additional reasons these cases can be difficult to prosecute. Jurors are suspect of evidence supplied by informants. Informants are typically rewarded for their services. Usually they are given leniency for pending cases. Their motive to assist with a successful drug investigation often results in them being overly aggressive in soliciting “drug dealers”. They often have tendencies to exaggerate their ability to access major drug dealers and instead introduce law enforcement to small time street level dealers. Jurors are also suspect of cases where there are purported sales of drugs but the arrests are delayed until a later date. The typical juror wonders why the defendant was not arrested at the time of the commission of the alleged crime. Unless the defendants were recorded in the act there is no evidence other than the word of the informant or person who conducted the controlled buy. Determining the surveillance locations is critical to establishing a defense. We have won several cases by showing the jury that the officers could not see what they claimed they could have scene from that particular surveillance location. There appears to be so much to this case that the challenge will more likely lie with prosecuting than defending.

The Law Offices of Stephen Neyman defends drugs crimes throughout Massachusetts. If you have been charged with a crime you need an experienced lawyer to protect your rights. Call us now at 617-263-6800 or contact us online.