Countless times in the past I have written posts about clients who never would have been charged with a crime had they just kept their mouths shut and not spoken to the police. Many of these people though they could talk their way out of criminal charges. They were wrong. Others thought they did nothing and therefore had nothing to lose by talking to the cops. They were wrong. Some of these people listened to the cops who “suggested” they waive any constitutional rights and speak with them. They too were wrong. There are many instances where clients have told me that “the cops tricked me into talking to them”. This post discusses a recent Massachusetts Supreme Judicial Court case where that tactic resulted in a partial reversal of a criminal conviction. 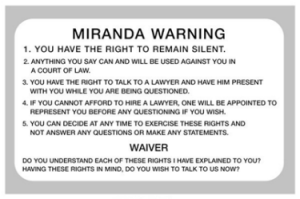 The Cops Tricked Me Into Talking To Them

The Police Will Try to Trick You Into Cooperating

Two days ago the decision in Commonwealth v. Thomas, SJC 10826, September 2, 2014 came down. In that case, the defendant was interviewed by state police and local police investigating an arson, felony murder case. The defendant agreed to a recorded interview. Almost immediately she said that she didn’t want to talk to them. Some discussion followed regarding the defendant having an outstanding warrant and whether or not she was under arrest. One of the officers returned the conversation to the case being investigated and asked the defendant if she wanted to speak with them. She continued that she wanted a lawyer present. Two more times the defendant was asked whether or not she wanted a lawyer. Both times she said that she did. Questioning ended. However, a detective returned to the interview room and told the defendant that the police would continue their investigation and that it was “gonna get a lot hotter” and that the police were “gonna give [the defendant] the opportunity to tell [her] side of the story”. The defendant started to talk and the detective said “[s]orry. You are already lawyered up”. The cops continued that if she was not an arsonist she would surrender her clothes presumably for testing. She offered them anything they wanted for testing. Again she was told that she could no longer talk as she had lawyered up. The defendant then agreed to waive her right to counsel and talk. The defendant lost her motion to suppress these statements before the trial judge.

On appeal the Supreme Judicial Court addressed the detective’s statements regarding the defendant having had her opportunity to talk but blowing it because she lawyered up. The Court held that this type of tactic fails to scrupulously honor the defendant’s right to have counsel present. Rather, it is an elicit measure designed to wear down resistance and cause a change of mind. The Court further held that the “now or never” proposition set out by the detective was also improper, coercive and violative of the Article 12 of the Massachusetts Declaration of Rights.

The police are not in the business of helping suspects in criminal cases. Talking to them is never a good idea. Call a lawyer right away. Don’t talk. Your story can wait. Our office can be reached 24/7. Call us at 617-263-6800 or send us an email. We know that we can help you.