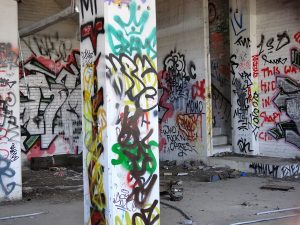 Vandalism and Malicious Destruction to Property

Halloween is traditionally a time when young people exercise poor judgement and commit acts of vandalism and malicious destruction of property. Some do it as a prank or a joke, others do it with malicious intent. This year, two teens from Burlington were arrested for acts of vandalism to a mosque early in the morning hours after Halloween, according to a Boston Globe news report.

“JJ” and “BB”, both age 18, have been accused of using red spray paint to graffiti the word “USA” over and over on the side of the Islamic Center of Burlington. Evidence of the crime was found by police patrolling the area shortly after 1:45 in the morning. The officers also noted that eggs had been smashed into the side of the mosque.

If convicted of these charges, the teens face penalties including:

The Burlington police have also indicated that they will be investigating the case as a hate crime, although the young men do not officially face any hate crime charges at this time. The Middlesex District Attorney, Marian Ryan indicated that, if evidence presents itself during the investigation to support such charges, then those charges may be considered at that time.

This is not the first time that the Islamic Center of Burlington has been struck by this kind of vandalism. In 2013, a similar incident occurred where vandals scribbled the word “USA” repeatedly on the walls of the mosque. No one was ever charged for the 2013 offense.

Vandalism and destruction of property are some of the most common crimes that young people commit. These young individuals do not exercise their best judgement, and do something that they often immediately regret. If you or a loved one has been accused of vandalism, you need the help of an experienced criminal defense lawyer.