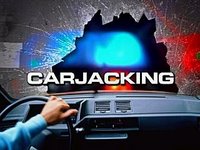 The Brockton Enterprise reports that Brandon Cain and Alberto Velasquez both from Brockton, Massachusetts have been indicted for Carjacking and Armed Robbery While Masked. The charges follow an incident alleged to have occurred this past August. The victims reported that they were meeting with a friend whom they owed five hundred dollars. On August 23, 2011 at approximately 1:00 p.m. the two arrived at the meeting place. Two men then approached their car brandishing firearms. One of the men fired. The victims were ordered out of their car. The defendants fled making off with about one thousand two hundred dollars. One of the victims reported that Velasquez wore a mask over the lower half of his face. The police found the car abandoned and then found the defendants in the woods. In the vicinity of the defendants the police found a .22 caliber rifle and a black BB gun. Charges of ammunition possession and firearm possession were filed against Velasquez in addition to the Armed Robbery and Carjacking indictments. The case will be prosecuted in the Plymouth Superior Court.

When evaluating potential defenses to a case Massachusetts Criminal Defense Lawyers often look at the facts and ask a simple question. What is wrong with the picture? In this case it is a little strange that the victims would be sitting in a car to pay a debt rather than simply going up to the door of the creditor and making their payment. Keep in mind it is reported that the creditor is a friend. Why then wait in the car? Next, this occurred in the daytime in a densely populated middle class residential neighborhood. There is no mention of witnesses seeing a masked man walking up to a parked car. There is no mention of any witnesses hearing a gunshot. There is no mention of anyone seeing someone carrying a .22 rifle as the report states. Don’t you think that someone would have seen this? Finally, why would the defendants be “hiding” in a wooded area near the location of the abandoned car? This makes absolutely no sense. Oftentimes in cases like this it turns out that the “victim” knows the defendant and the actual facts are nowhere near as egregious as initially reported. Sometimes these types of accusations arise from disputes over ownership of the vehicle, arguments over debts or drug deals gone bad. I would expect much more than was initially reported is behind these accusations.

Carjacking in Massachusetts is proscribed by Massachusetts General Laws Chapter 265 Section 21A. The law states anyone who steals a car by putting someone in fear is guilty of carjacking. The attempt does not have to be successful to satisfy the elements of the crime. Both the Massachusetts Superior Courts and the Massachusetts District Courts have jurisdiction over this crime. Nevertheless, Carjacking in Massachusetts is a felony. There is an additional aspect of this law that is pertinent to this case. If the accused uses a rifle a conviction mandates a five year state prison sentence. The district courts do not have jurisdiction over this portion of the statute. The armed robbery statute has similar language. There is a five year mandatory minimum for the masked portion of the offense as well as the use of the firearm in connection with the commission of the crime.

Our office defends these cases in Brockton and all throughout Massachusetts. We can be reached at all times either by calling us at 617-263-6800 or contacting us online. Call now to discuss your criminal case. We are here to help you.