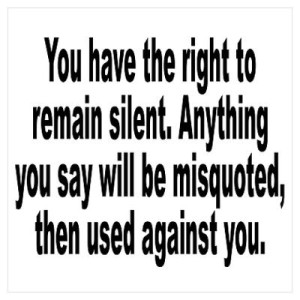 Every few weeks I get a call from a perspective client telling me that he or she heard that the cops are looking for them. They want to know what they should do. These people tend to ask the same questions. Do I need a lawyer? What if I just talk to the police to hear what they have to say? Won’t it look bad if I say I have a lawyer? Many of these people think they can put the problem to rest by talking to the cops. They can’t sleep at night. They are worried about the unknown. They want answers now. They want the case over now. The problem is that talking with the police will not help you. It will only hurt you. When I am asked the question “do I need a criminal defense attorney before I am charged with a crime” the answers is always and unequivocally a resounding “yes”. Here is why.

More often than not cops interview suspects to confirm their belief that this person committed the crime being investigated. Armed with complaints, witness statements, physical evidence and forensic materials the cops make judgments about who did what. When they interrogate a suspect they ask questions designed to fill in the blanks only. They are not necessarily looking for a confession. They might be looking to see if you had a motive to commit the crime. Perhaps they want to confirm that you were near the crime scene at the time of the incident. Maybe they want to see if you own a weapon that was used to perpetrate the act. They might even want to see you get caught in a lie so that they can use “consciousness of guilt” evidence against you at trial. The cops will get you to say something that will help them prove their case against you. They will not however share information with you. So, your strategy to see what they have against you will fail and you may incriminate yourself in your efforts to see why they are looking for you.

Lying to the cops is never a good idea. Massachusetts has a statute that makes it a crime to mislead the cops in the course of their investigation. In recent years this statute has been used frequently to punish people who lie to cops investigating a case. Let’s say that you are a suspect in a robbery case. If you have discussions with the police and lie to them you might get charged with obstruction, particularly if they can’t get you for the robbery they are investigating. And of course, if you did in fact commit the robbery you probably will lie to the cops or try to mislead them during their questioning of you. Again, it is a bad idea to talk to them without a lawyer.

Saying nothing is always better than talking. But, without a lawyer the police will continue to contact you. They will pressure you. They will call you constantly. They will go to your place of work. They will go to your home. They will persist until you relent and agree to talk to them. Conversely, when you hire a lawyer they can’t talk to you unless your lawyer is present and agrees to the meeting. If they violate this right they risk their case getting dismissed. I have represented countless people during the investigation stage of criminal proceedings. Most of them don’t get charged whereas they would have had they spoken with the investigating officers. Protect yourself by hiring a lawyer anytime you think you might have a problem with the law. We can be reached 24/7 at 617-263-6800. Call us now.